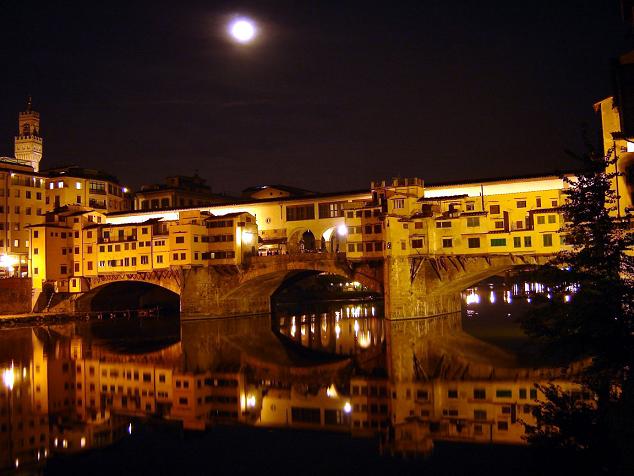 Florence is crossed by the Arno river that runs through the city with a trend ranging from northwest to southeast. The crossing from one bank to another is possible thanks to the presence of vary bridges, the oldest of which date back to the early fourteenth century.

The oldest of them, as can be seen already from the name, is the Ponte Vecchio, located on the axis of the Via Cassia which linked Florence to Rome and characterized by a series of buildings on the parapets.

This peculiarity, which we see today almost as an exception (along with the Rialto Bridge in Venice or Ponte di Pavia), was not exclusive of the Ponte Vecchio as all the ancient Florentine bridges housed buildings and structures of different types. Even the Ponte alle Grazie (also called Bridge of the Rubicon because it was built in the time of this mayor) owes its name to the presence on it of a chapel that housed a small community of nuns. Always of ancient origin are the Ponte Santa Trinità and the Ponte alla Carraia, so called because it served primarily for the passage of goods wagons. Also had a certain importance to the Bridge Section of the remains of which remain. Over time, the path of the Arno was enriched with other important steps (Ponte Vespucci, Ponte alla Vittoria, Ponte San Niccolò...).
Share 0 Tweet 0 +1
Previous Next