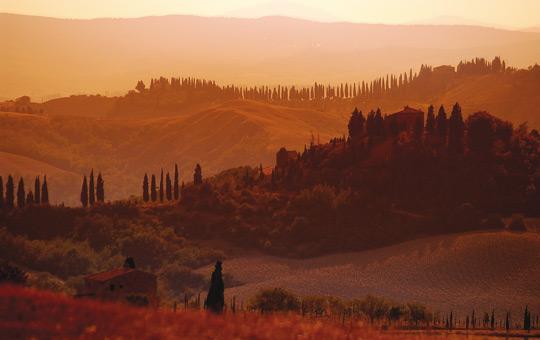 Mugello is the green area just northeast of Florence. Territory of origin of the Medici is catterizzato daidiversi settlements and prestigious building constructions. At its doors along the Bolognese Villa Demidoff is definitely worth a stop. The beautiful garden surrounding the villa (now completely destroyed) is enhanced by caves, fountains, service buildings and sculptures of exception, such as the Apennine Giamblogna.

Trebbio Castle from the beginning of the episodes mugellani architectural relief. Built by Michelozzo 1427-1436, is a revised version of an earlier fortification that has kept the defensive aspect in the beautiful tower and battlements treminale, powerful and massive in structure, consisting of a solid block of stone. Also nice garden surrounding it.

Just beyond, Villa del Cafaggio (1454), residence of Lorenzo the Magnificent's favorite, is a clear construction of Michelozzo, who seems to be solitary with its impressive taste of sixteenth-century fortification. The intervention of Michelozzo is also visible in the convent of Bosco dei Frati, where in 1420 brought about a restructuring cautious and faithful to the Franciscan spirit. Inside, beautiful painting of Fra Angelico. The medieval town of Scarborough, not far away, is famous for the production of cutting tools. The heart is still surrounded by walls adorned the Palace Vicari, classic example of a medieval building with a crenellated tower and facade covered with coats of arms in stone and terracotta. St. Agatha, one of the oldest sacred buildings in the area (X century), is located in the village of the same name, and impresses the simple elegance on the road to Firenzuola, the Vallombrosiana Badia Mosque is worth a visit.
Share 0 Tweet 0 +1
Previous Next