The Versilia coast in Tuscany 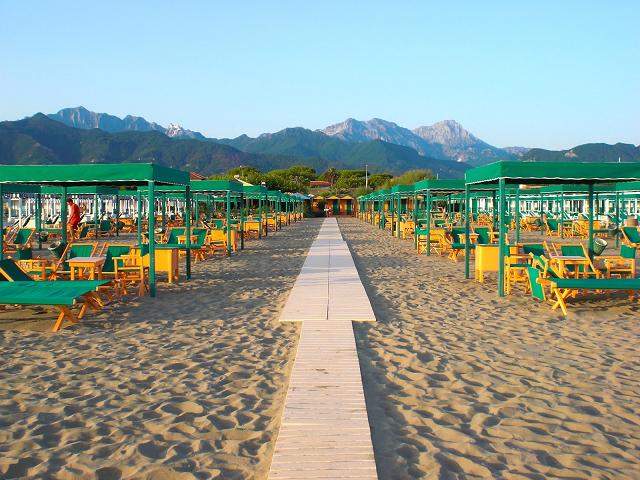 The extension of the Versilia is of approximately 160 Kmq.; the coast is with sands and with I found them low and Km is developed for 20. Its mountains catch up summits of beyond 1800 m. To north it is delimited from the foce of the Cinquale, to east from the crinale of the Alps Apuane, to south from the lago of Massaciuccoli and to the west from the Tyrrhenian sea.

For the historical Versilia the territory is divided in the districts of Pietrasanta, Seravezza Forte dei Marmi, and Stazzema; while, for the not historical part, in the common ones of Massarosa, Camaiore and Viareggio. All the district ones are in province of Lucca.
The Versilia is pointed out on the mar Tyrrhenian and is rich of fresh and always greens pinete. The coast of the Versilia is characterized from very 20 Km of wide the most fine sand beach that comes down sweetly in the sea. The main marine locality of the Versilia is four (Viareggio, Lido di Camaiore, Marina di Pietrasanta and Forte dei Marmi) and is in the position and in a position to offering to the own hosts one intense vacation to the standard of the divertimento in full load relax.
For the lovers of the sea and the nature, beyond to the equipped beach, the Versilia has also wide the free beach areas, immensest than 3 Km is situated between Viareggio and Torre del Lago Puccini and is characterized from the coastal dune presence of great naturalistic interest, included in the Natural Park Migliarino S.Rossore.
The port of Viareggio is rich of beautifulst boats and its shipyards between are famous in the world. The beaches equipped of the other Versilia's localities, offer to the diportista and to the lover of the sail varied possibility to take the sea with all the floating types of and practicing to all the types of aquatic sports. The sea of the Versilia boasts the Fleet Peschereccia Viareggina, one of the more numerous important and of the Tyrrhenian one, thanks to which we can always taste the fresh fish in the restaurants, the fish markets and Hotels in Versilia.
Most famous Discotheques and Night clubs animate the nights and attract many young and old people in one turning of emotions for all the tastes. The Versilia enjoys a climate a lot moderated.
The medium temperatures are of approximately 25°C of summer and 10°C of winter. The water of the sea in summer catches up the 25°C, the temperature of the sand in surface arrives quite around to the 50°C.

Viareggio. Viareggio is one elegant and refined locality of the versiliese coast. Viareggio between is known and is one of the main tourist goals to world-wide level. Center of the divertimento and native land of the Viareggio Carnival will know to hit to you with the most colorful lights of the night that alternate to the beautifulst days of sun and the splendid sunsets and tranquillity in the winter period. And however Viareggio is not never far from the reflectors being able to offer, in whichever season of the year, various reasons of tourist attraction. Along its interminable walk they are scatters bar, storees, gelaterie, pizzerie to you and restaurants that their customers receive are in summer that in winter. Every day in the walk of Viareggio persons from every part of the world meet themselves and can notice like the colors of all the premises, of the sea and of the sky to the sunset the ravvano is of girno that of night 365 days to the year. The main manifestation is the Carnevale of Viareggio.

The Carnival of Viareggio is been born in 1873 thanks to the idea of the inhabitants of that period to which it came in mind to organize one various Sunday. They realized therefore a corteo of carrozze adorned with flowers that up and down went for the Way Direction (main road of the city). Just in that occasion masking was organized from part of the citizens also protest who were forced to pay too many taxes in which the head of the communal tax-collectors took itself in turn just. Paraded piacque the a lot is to the promotori that to the citizens and nacque therefore the idea to realize every year of the wagons that interpreted humors and malumori of people. Viareggio from then has become the native land of the Italian Carnival, with its course masked characterizes to you from allegorical wagons in cartapesta: of the true works of art to whose realization the tank crewmen viareggini dedicate an entire year. Politicians, men of culture or the show of every part of the world are taken in every turn year, through one of those wagons that seem to take life during the paraded one. On every wagon boys and dressed children to topic find themselves also who launch coriandoli and stars spinning to the spectators you amuse yourself. During all the period festivities masked in the various rioni of the city and numerous manifestations of show come organized also, sport and culture. For the sport enough to cite the juvenile International Torneo of soccer, than every year door in Italy society of all the continents. The official mask of the Carnival of Viareggio is the Burlamacco, a clown who garment several indumenti: one coveralls to chess red white men and, resumption from the custom of Harlequin, ponpon a stolen white man from the camicione of Pierrot, one gorghiera white woman to the Capitan Spaventa, a red hat, on imitation of that one of Rugantino, and a black, typical cape of Balanzone. The Burlamacco name derives from Buffalmacco, that he was a painter fiorentino and a personage of the Decameron, but is also legacy to the lucchese last name Burlamacchi.

Camaiore. The common of Camaiore counts beyond 30.000 inhabitants and it extends from the fascinating summits of the Alps Apuane until the mar Tyrrhenian, in the heart of a rich zone of charme and of tradition which is the Versilia. We can subdivide the territory of Camaiore in four great areas: the hills of the Seimiglia, the capoluogo with its go them, flat of Capezzano and the shoreline of Lido. Main characteristics of Camaiore are the beauty of its landscapes and the semplicity with which we can pass from the sea to hills, from mounts to the lago, the beach to the park of the Apuane; all covering only least chilometrti. The communal territory comprises 24 fractions very and between these more it celebrates and popolate, that is Lido di Camaiore, most famous bathing center from the spiagge sabbiose, and Capezzano Pianore, in famous past for the production of the strawberries and today above all for its floricoltura to the vanguard in Europe. All Deserve moreover particular consideration also the collinari, rich takeovers of history, wonderful traditions and landscapes. Camaiore knows to offer an evocative and charming rich landscape of history, green, nature and sea.

Forte dei Marmi. The common one of Forte of the Marmi has become in the last years an appreciated and known tourist locality all over the world and has known to transform a wonderful part of the original atmosphere in garden, and prati rigogliosi with villas inserted in the green. Forte dei Marmi the host can riscoprire historical architectonic testimonies and cultural, charming countries carefully lay down to you in the numerous ones go them. The zone Forte dei Marmi is situated on the coast of the Versilia and introduces a wide sandy beach with an evocative landscape dominated from the Apuane characterized from its shapes sour and tormented and the knots walls of the hollow ones of marble. Bathing establishments with equipments to the avanguaria and indeed evocative scenes. Also the Forte dei Marmi Hotels they are to the height of their reputation like the prestigious storees where the shopping stimulating alternative to the walks becomes one on the wharf. Forte dei Marmi it is by now has become between the preferred goals for who wishes to pass a stay dipped in the green between garden and pinete, to two steps from the great beach with fine sand and the comfort of the best ones it lodges of the zone.

Pietrasanta. The common one of Pietrasanta is of ancient medioevale origin; we can consider Pietrasanta capoluogo historical of the Versilia and the understood one them of the artistic working of the Marble. Marina di Pietrasanta it is one rinomata seaside resort where it is possible to find anytime of the day; seen the presence of numerous discotheques and discopub, Navy of Pietrasanta the night is transformed and received in its coming from young premises from whichever part of the world. Also to Navy of Pietrasanta we can find Hotel and Lodges for whichever taste, from Alberghi economic until arriving to the luxury Hotels. the beauty of the historical center spouse perfectly with the botteghe of the craftsmen of the marble, with the rinomate bronze foundries and the laboratories where artistic mosaics are created appreciates to you all over the world. Pietrasanta makes faith to its tradition showing interesting examples of religious, military and civil architecture. Its artistic patrimony, undoubtedly legacy to the city vicissitudes, comprises pregevoli works of famous masters of the chisel, from historical searches marks it the passage of the great Michelangelo, than to Pietrasanta it lived while it chose marbles of its works in the hollow marble neighbors and here the purchase of marbles for the facade of S.Lorenzo to Florence dealt. Marina di Pietrasanta it makes part of the famous Versilia Coast, an authentic mosaic of amazing places that can easy be caught up moving itself of little kilometers in machine, in bicycle or even on foot. In short time it is passed from the marine atmosphere to the green campaign and very many they are the occasions of svago: from the velico sport to the cycling, from the podismo to the mountaineering. Recreational equipments sport and of every kind characterize your vacation: numerous fields from tennis, fields of soccer, arenas, track from skating, handling, shooting to sign, chartering of bicycles, motorcycles and a field from golf international to 18 holes.
Share 0 Tweet 0 +1
Previous Next