The Florence Flood On 4 November 1966 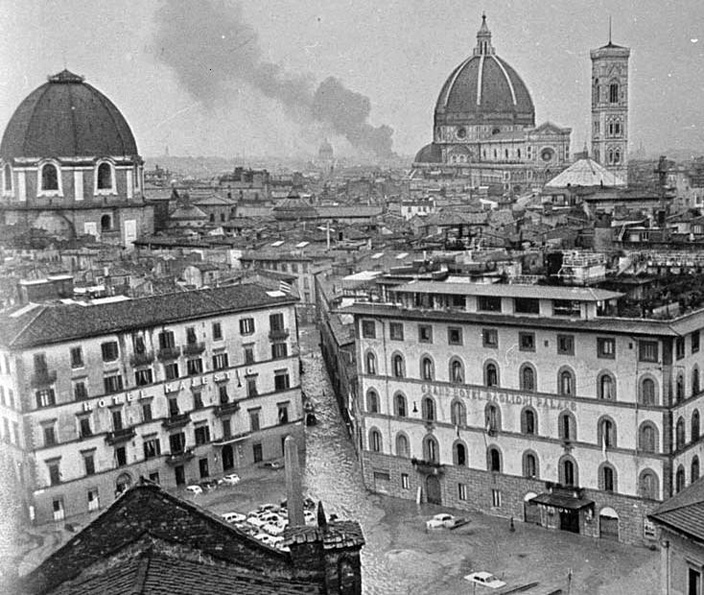 On the 4 November 1966 at 5.30 P.M. after two days of heavy and continual rain, Florence was flooded. The river Arno broke its banks and the water reached the first floor of the houses, it entered the Battostero, Palzzo vecchio and the Cathedral causing much damage to numerous works of arts. Many people died and the artistic patrimony (in the pic, Ponte Vecchio) was in danger. The river withdrew two day later leaving the city in a catastrophic state.

No bread could be found, there was no electricity, many people were homeless; the water had reached the level of 4 metres and 92 centimetres (the photograph is one taken during the flood). This was Florence's worst moment since the end of the war. Fortunately whit the help of volunteer corps and public assistance Florence returned to normality in a short time and today we can admire the city in all its splendour. Unfortunately there is still the fear of a future flood but the authority has programmed efficacious remedies for the future.

Gas, electricity and water supplies were cut off, adding to the chaos. The damage caused in Florence was incalculable; hundreds of historic libraries and archives were affected in the flood. Thousands of young volunteers from all over Italy and from abroad come to Florence in order to save the art works. Those volunteers, nicknamed the 'mud angels', who did all the possible to limit the impact of the Florence Food. A million books from the BNC (The Biblioteca Nazionale Centrale Firenze) damage by the flood; hundreds of thousands of old and rare books and archives. Is estimated that it would take 20 years to undo the worst of what the Arno River had done in few minutes.
Share 0 Tweet 0 +1
Previous Next