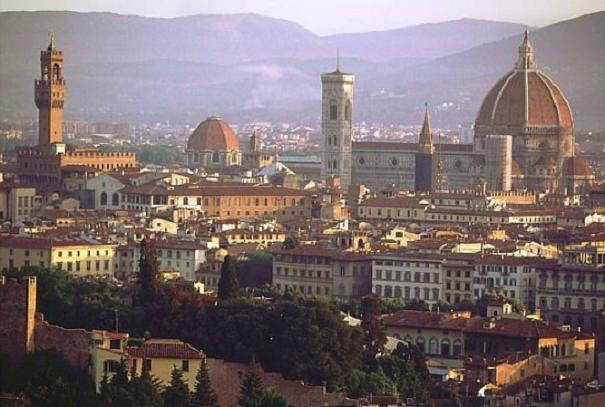 Florence is above all a city of art. Florence is the birthplace of many famous people such as Dante, Boccaccio, Machaivelli and Galileo Galilei. Florence was made more beautiful by the works of art of Michelangelo, Brunelleschi, Botticelli, Donatello and Giotto.' Whoever visits Florence cannot ever be deluded. This thanks to its cultural and artistic inheritance almost unique in Europe and in the world, which has its base in the middle age and its maximum glory in the Renaissance. Florence and Rome are the history of our civility. In Florence , in the XV century, bases were set to reflourish art and culture, here thanks to writers like Dante, Petrarca and Macchaivelli, culture and the Italian language were born. Artists like Botticelli , Michelangelo and Donatello made Florence to be one of the artistic capitals in the world.

A Piece of History

Florence was founded by the Romans in the 59B.C. and called Florentia . You can see 'Cardo Maximus' in the actual street Strozzi, street degli Speziali and street del Corso; and the 'Decumanus' in street Calimala, street Roma, and street Por Santa Maria. In the actual ' Place of Repubblica' the Foro was found during the imperial period the city increased its richness, it became an active commercial centre where handicraftsmen worked and made Florence famous. During the Barbarian invasion the city occupied by Ostrogoti, Byzantine and Goth of Totila. It was in that period that the inhabitants gathered around the Bishops, in the monasteries, which became centres of culture and work. The Longobardi conquered it later in the VI century and only later the city emerged from the darkness of the middle age into an independent sate. After the Longobardi were defeated by the Franchi, the Duke was substituted by a count; later the counts were substituted by the Marquis. Florence reached the height of its glory between the XI and XV century, becoming one of the main centres of power in Italy, balancing between the authority of Emperors and Popes, superating the fear of the struggling between the Guelfi and Ghibeliini.

In the XV century Florence passed under the Signoria dei Granduchi di Tuscany. Lorence and the rest of Tuscany remained under the dominium of Medici for three centuries. In this period the city was at the height of its glory, from the artistic, political and economical point of view, the city developed in an enormous way: painters, sculptors and architects filled roads, churches and palace with the greatest works of art of the Renaissance. In the Granducato dei medici was succeeded by the Loren in the XVIII century, whose Granducato lasted until 1860, in the year in which Florence was the capital from 1865 to 1871.

The city of Florence in the XI and XII expanded to the right bank of the river Arno. Small villages rose on the other side of the river , so in the 1172 a second fencing wall was built. The towns closed inside the first fencing wall, were formed of a mass of houses and watch towers, whereas the building between the first and second Fencing -walls were more stretched out.

In the XII and XIII there was a strong commercial boom thanks to the large number of artisans-ironmongers, shoemakers and jewellers. In the 1100 the city became autonomous, in 1200 it was constituted of Counsellors , with the help of Town Counsellors . Power was in the hands of the rich: this caused rivality among the rich families. The families were very united and their houses became higher, becoming when necessary fortresses with drawbridges, forming a good defendable position.

Discord between the richer families increased so much that two parties were formed: The Guelfi , faithful to the Pope but against the Emperor and the Ghibellini, faithful to the Emperor but against the Pope. The Ghibellini were the strongest for a short time; in the 1250 the Guelfi took over the town Council was ruled bythe Signoria and the city was very prosperous. In these period an alliance was formed with Lucca, Siena, Arezzo and Volterra , San Gimignano and Poggibonsi were bought this prosperity caused rivality once more between the Guelfi and Ghibellini: after a short time the Guelfi regained dominion of the city. Great importance was given to the corporations divided in Maggiori and Minori.

Among the main corporation was the Arte of Lana , that of Giudici, Medici and Speziali , which brought more prosperity and welfare to the city . At the end of the XIII century it became the political and religious centre of the city due to the building of the cathedral of Santa Maria del Fiore and Palazzo Vecchio.

The dialect' Volgare' considered the most harmonious of all, was stated to be the written and spoken language. Thanks to the prosperity the desire to make the city beautiful was very strong, in fact personalities such as Cimabue, Gaddo Gaddi for artists, Arnolfo di Cambio for sculpture, geniuses like Dante and Giotto emerged in these period. Apart from the Battistero and the Church of Santa Reparata others were built : San Michele Visdomini, SS Apostali, San Niccolò and Santa Margherita Sopr'Arno.

In the first half of the third century many important events happened in the social and economical life in Florence. Thanks to the social and urban growth many towns arose. At the beginning of the century the urbanistic development of the city does not changes very much.

The last fencing wall was started in 1248 and completed in 1333; this wall included the towns and new productive and religious Installations, which were realized outside the doors of the pre-existent walls, some of these new place arose thanks to various order of beggars (Carmelites, Franciscans). These orders were already present in the previous fencing wall in the main roads: street Romana, Roads toward the Valdarno, street i Pratese and street Pistoiese, the road towards Mugello and passes toward Bologna. Apart from all this there were installations of Patrician order which created important transformation in the town life. All this was supported in particular by the rich families who had strong interests in the town. There were many changes in the area inside the ancient wall of 1078 to adapt the town to the new exigency. In these century many changes regarded the life of the town, the rich families controlled all the building and their transformation. We owe to them the construction of Hospitals and charitable institutions. The Magistracy and Council dictated rules which regarded any initiative of public character, another important new transformation was that of the building initiative: the promoters were generally religious or other corporations, for example, the fine Arts.

Florence of XIV century was very renovated in comparison to the XIII century but the function is always the same, the city life was based on a hierarchical conception and reflected on the institutions of the period. After the completion of the last fencing wall, the territory was divided into four Quarters, each Quarter was divided in four Gonfolans. In the oldest zone (the one around the Mercato Vecchio) there were the houses and shops of many old families, apart from the main political seats. In particular, the fine Arts were established there, in the oldest part of the city, the squares of the Cathedral and the Battistero, faced each other. The strip between the last one wall and the last one was full of houses and shops of small dimension; here there are big conventual or religious building belonging to the begging Franciscan or Domenican orders. In these region there were many towers, some of theme were incorporated in other buildings, in correspondence to small opening there were the Logge used for meetings and which became 'the heart' of the Florentine city life. In the centre of the city many public work yards were opened and very busy realizing works of arts; in fact Giotto and Talenti worked in the construction of the church-steeple of the cathedral (Santa Maria del Fiore). The Church of Orsanmichele and the Loggia del Bigallo were built near the cathedral; and the Loggia del mercato church and the Loggia dei Lanzi were also being built. In these period the Domenican church of Santa Maria Novella and he Franciscan church of Santa Croce were being rebuilt; the museum of Bargello was built and Piazza Signoria was put in order, as also the bridge alla Carraia and the Ponte Vecchio (re-formed in 1345).

The characteristic feature was the present of shops on the bridges (today they can be found only on Ponte Vecchio, the others were destroyed in the World War). The main part of the architectonic renovation of the city entrusted to Arnoldo di Cambio, who realized it in Gothic stile, the city tended to divide itself in two distinct parts: one central part situated to the north of the river, the external part situated around it, the river Arno passed through the city.

Regarding the citizens, we must remember that the high class did not disdain, contact with the lower class; there were shops and artisan laboratories near the palaces of nobility, at the end of the century the Florentines looked towards the country. The landscape changed due to interest of the citizens of investing in building outside the city and the aspect of the country is the same that today strikes the tourists who came to visit Florence.

1400 for the city was a century of revival, not only economically but also culturally, it was principally Florence that gave life to these new impulses, expressing the concept of reviving again, of renewing art, which will be the base of the Renaissance. The city became the fulcrum of this cultural movement, since the birth of the Renaissance, at the beginning of 1400, it developed new ideas.

The movement seems to be tightly connected with the new Florentine middle classes and it is The Pitti, Ruccelai, Medici, Strozzi familes who became promoters of the new culture and architectonical style. We can consider the Medici family as the most active; they collaborated with Cosimo il Vecchio, with Lorenzo il Magnifico and later with other artists and philosophers expressing the wishes of the new Signoria. In the limits of the Florentine culture of the Renaissance, Cosimo il Vecchio, who was the leader of these movement, protected the artist, and encouraged the building and artistic initiation of the city.

Great fervour was found in literature, with Poggio Bracciolini, Coluccio Salutati; in philosophy, with Marsilio Ficino who renovated the Accademia Platonica at Careggi; in architecture we find Filippo Brunelleschi, Michelozzo, Leon Battista Alberti, Bernardo Rosselino, Giuliano da San Gallo. The principal spur of these work is the study of art, culture and greek and roman philosophy which was studied in a scientific way. In using the traditional technology with the new ones, the artists worked uniting scientific knowledge with art. Nature and art became two detrmining factors: to measure and reproduce reality, a knowledge of prospective was necessary and fundamental. These new studies gave splendid results in art, sculpture and architecture. In architecture artists like Donatello, Masaccio and Brunelleschi agreed with the studies.

Brunelleschi's masterpiece is the Cupola of Santa Maria in Fiore, which sums up in a complete way, his activity apart from the cupola, he worked at the Ospedale degli innocenti, at the Carestia Vecchia di san Lorenzo, at the church of San Lorenzo, at the church of S.Spirito, Palazzo Pitti and directed works at the Cappella dei Pazzi. It is in the period that the beautiful architectonic masterpieces were built and that are admired by the whole world; many famous artists followed and Florence has become one of the main spots for international touring.
Share 0 Tweet 0 +1
Previous Next