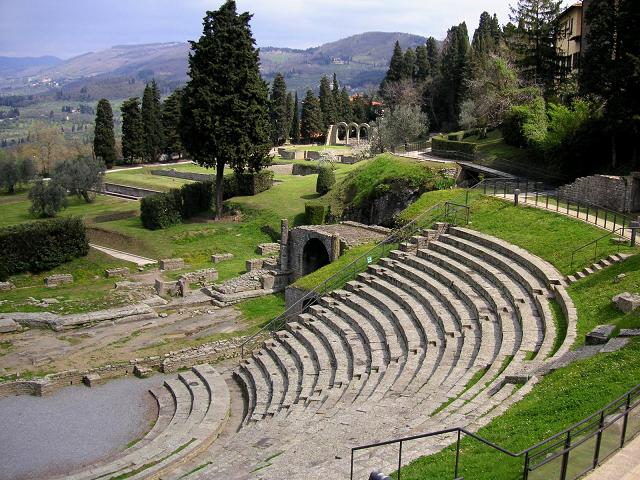 Recent archaeological discoveries have shown that the first installations can be dated back to the aeneolitic period and bronze area (II millennium b.C.) The first real urban centre with fencing walls is of the IV century b.C. During the roman imperial period Fiesole loses its importance due to the power of near Florence,but it becomes important again thanks to its strategic position during the 'Late Empire' Some discovered tombs testimony the presence of Longobards in Fiesole between the VI and VII century .

Archaeological area
Temple: Situated at the far end of the north side of the archaeological area,the temple was built twice:the first one in the IV century with etruscan characteristics,and the second one during the roman age keeping the same design.
Theatre: It can be dated back to the last quarter of the first century b.C.It still conserves the orchestra and the cavea,part reserved to the audience.Behind the scene,a portico of which are left only 9 pillars which have been restored.
Thermal Springs: They were restored at the end of the XIX century,rebuilding some missing parts.They were formed by three main areas: the calidarium,the tepidarium, and the frigidarium.
Museum. It gathers the materials coming both from the archaeological zone and other areas of Fiesole and surroundings (the old etruria). In the first room at the ground floor,some bronzetti (little bronze worship statues),the so-called 'wolf' in bronze and a marble group. In the second room there are the materials coming from Bargellino tomb. A section of the museum is occupied by antiquarium,where are gathered materials belonging to collections given to the museum.
Fencing Walls. In various parts of the town there are still rests of the ancient fencing walls,which can be dated back to IV-III century b.C.The first part of the wall is still visible in the archaeological zone,north of the town.The most part of walls is now underground while another portion,maybe belonged to acropolis is visible on San Francesco hill.
The tombs of via Bargellino. Two of these ancient tombs are still visible.They were discovered at the end of the XIX century and they belong to one of the necropolis of Fiesole,that during etruscan and roman periods were situated outside the fencing walls.
Share 0 Tweet 0 +1
Previous Next