Greve in Chianti near Florence 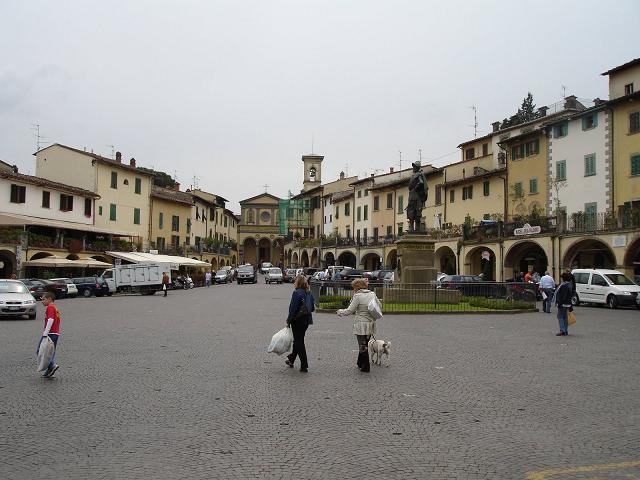 Greve in Chianti is a municipality in the province of Florence of about 11,000 inhabitants and is an agricultural and industrial center and is approximately 40 Km from Florence, in the south-east. The area takes its name from the river that runs through it and is the heart of the area where they produce the Chianti Classico.
Since its inception was, due to its location in the valley central to the castles and villages, a crossing point in trade crossroads between the Middle Ages and the directives Firenze-Siena and Valdarno and Val di Pesa.

Santa Croce. The small church overlooking the main square and was built in 1833 by Cambray Digny to replace an old oratory. The style is neoclassical in style with some hints of Brunelleschi and Alberti. Inside are works from churches in the area now no longer linked to the worship of the most important of the Madonna and Child with Saints by Lorenzo Bicci, a fresco of the Madonna and Child by the Master of Greve and a tablet depicting the Annunciation.

Church and convent of S. Francesco. On a hill, not far from the square, there is the Church and Convent of St. Francis realized in 1400. It was abandoned after the suppression of Napoleon's army and later became municipal property. The church has a single nave divided from the sacristy of various works of art such as La Pieta between St. John the Baptist.

Pieve di San Cresci. Near Montefioralle in the Romanesque style of the twelfth century.

Pieve di San Leonino. Near the Castle of Panzano built in the VIII-IX century on an ancient Etruscan settlement of the fourth century BC

Oratory of Saint Eufrosino. The cult of the Holy Eufrosino is typical of the Chianti Fiorentino and located in the oratory, near Panzano, its highest historical expression.

Church of Santa Maria. Located in the walls of the ancient castle of Panzano, the church built at the end of 1900 was built on the remains of a pre-existing structure of the Middle Ages.

Church of San Donato a Mugnana. Located near the old castle near the town of Chiocchio in the middle of the highway that connects Greve in Chianti Strada in Chianti has Roman origins and has undergone several renovations in the sixteenth century.