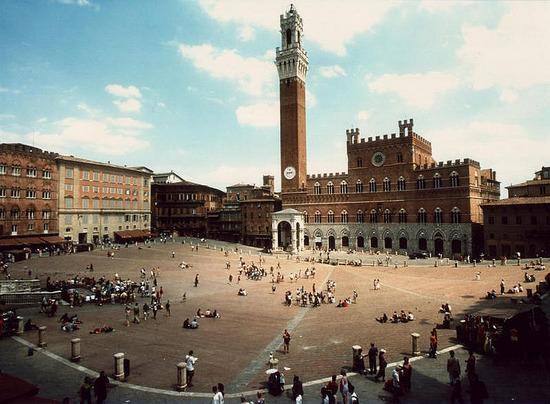 Siena, in the heart of Tuscany, stands in the silence of vineyards and hills exterminated.
Any visitor, even the most hurried, fails to appreciate the historicity of the small and winding alleys, of the noble buildings that frame this beautiful art cities. Walking through the streets picole, it seems to succeed in the various stages of the history of Siena. It was born according to the taste Etruscan, after which the Roman power does not seem to save the Tuscan city of Rome, thus becoming Cologne, known as Sena Julia. But the greatest importance is able to have her in the medieval period, first with the power Lombard and later with the Carolingians.

The territory of Siena allows the tourist a 'choice between the various itineraries to discover and unspoiled natural landscapes, archaeological sites, perfectly preserved medieval villages, in cities such as San Gimignano, Pienza, Montalcino, Montepulciano. You can visit museums, churches and palaces, where there are works of art of the most important and famous Sienese artists such as Duccio, Nicola Pisano, Lorenzetti, Jacopo della Quercia. The tourist can only be embarrassed by the choices of numerous offers proposals of the various cottages, many of them family-owned, offering a perfect combination of familiarity and tradition. Do not miss delicious Hotels housed in historic buildings and castles. As in the whole area Tuscany, certainly can not miss Excellent restaurants, wine bars that treat traditional cuisine and products of the neighboring lands of Chianti.

Palio di Siena The event most 'important in the field of Siena is without a doubt the Palio of the most beautiful, the most loved of Italian popular demonstrations, which contains in itself the characteristics of a religious festival and civil at the same time, a fascinating show, a historical cultural revival that culminates in a wild horse race in the charming Piazza del Campo, which enhance the pride and the spirit of competition of diacessette districts. Each Contrada, ruled by a 'Seat' (Council) popular, is characterized by its own facility, a church, completely independent of the parish, a museum that collects itself throughout the history of the area: with the Palios won and ancient relics. The Palio of Siena is over 2 times the 'year on July 2' Palio in honor of the Madonna of Provenzano 'and August 16' Palio dell 'Assunta'. The day of the horse race is only the final stage of a series of events that are taking part all citizens. The major implication of citizenship leaves estereffatto any tourist, making a living for a few days now a reality alien and unknown to the hustle and bustle of every day. The phases of the Palio start four days before, with the 'is': a selection of ten horses, deemed suitable for running and grabs the award, which is persorteggio, at ten districts participating in this follow the six tests that are racing in the morning and evening. On the day of the Palio at 15 the great bell of the bell tower draws the districts to the rally in the courtyard of the Podesta from there start the parade that will march in the Piazza del Campo, after which the great bell of the tower will no longer play, the blare of trumpets accompany the last drum roll heralded the final and the bursting of the firecracker give the signal for the 'out of the horses from. The entire square with silence and emotion follows the steps of alignment between the ropes, better consciuta as the 'Move'... Finally, the race, which consists of a complete revolution of the square. The district winner proudly carries the 'CENCIO' through the streets of the city on the feast of drums and flags.

Siena Cathedral The Duomo of Siena has a plant rather complex, which shows in the main part (cross-shaped) a subdivision in several bays. The central part of the plant has a hexagon defined by six composite pillars supporting a large dome. The main facade is extremely adorned with Gothic sculptures, mostly bas-reliefs that surround the big three gates conch that provide access to the three naves. The Cathedral of Siena is extremely bright and light sources are more the huge central dome and the large circular window located above the main entrance. The interior is very rich and colorful, with horizontal bands of color on the pillars.
Share 0 Tweet 0 +1
Previous Next