Dante Alighieri and the Divina Commedia 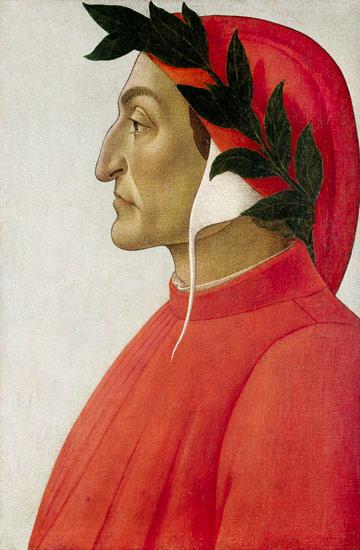 The greatest poet of Italy, generally acclaimed with Shakespeare and Goethe as one of the three universal geniuses of western European literature, Dante Alighieri was also a prose writer, rhetorician, theorist of his own Italian vernacular literature, moral philosopher, and political thinker, with an immense variety of literary output.

The loftiness of his art and the breadth and depth of his interests make him one of the most important figures of medieval and Romance literature. By writing his masterpiece La divina commedia (The Divine Comedy) in Italian rather than in Latin he influenced decisively the evolution of European literature away from its origins in Latin culture and toward the expression of a new civilization.

The poem itself is the greatest Christian poem. It is a profound vision of the medieval Christian world in terms of the principal problems with which it was most interested: man's moral "obligation to be"; the relationship between reason and faith; the value of learning and poetry as the means of understanding the supernatural; the reaching of the metaphysical through analysis of reality; and the understanding of the Christian revelation through theological study. But the choice of the vernacular Italian language, as opposed to Latin, as the means of communication and the wide range of styles employed mark a precise turning point in Italian literature in its earliest development.

In addition to The Divine Comedy, the remaining works of Dante hold an important place in the history of Italian literature and make their essential contribution to the formation of a literary awareness and tradition, establishing new literary forms and new aims of thought and influencing his successors the poet Petrarch and the prose writer Boccaccio in the 14th century.
Share 0 Tweet 0 +1
Previous Next