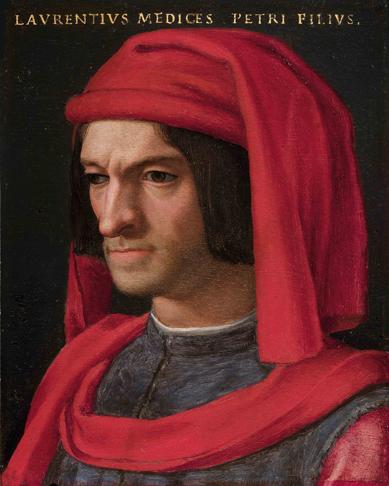 Lorenzo, said the Magnificent, was born in Florence in 1449 by Pietro di Cosimo il Vecchio and Lucrezia Tornabuoni and from an early age he received a humanistic education. In 1466 he began to be part of the Balia and of the Council of the Hundred. In 1469 he married the noble Clarice Orsini. In the same year after the death of his father, ruler of Florence, accepted the care of the city and the state, while remaining officially a private citizen.

He showed he was a fine diplomat and a shrewd politician. Partly modified some jurisdictions of Florence in order to get a balance of more power. He became a life member of the Council of One Hundred. In 1472 he led Florence in the war of Volterra to strengthen the rule of the city in the Italian peninsula. Until then, the relations with the papacy had been good, but soon ended up defective due to faulty designs on Imola Girolamo Riario, nephew of the Pope Sixtus IV della Rovere: it happened that Jacopo and Francesco Pazzi, political rivals of the Medici rule, agreed with the ambitious Francesco Salviati, archbishop of Pisa, and hatched the conspiracy, she was aware of the Pope Sixtus IV, killed in Santa Maria del Fiore the 26 April 1476 Giuliano, brother of Lorenzo the Magnificent and the latter wounded managed to take refuge in the sacristy.

There was a violent reaction of the Florentines who lynched at first Jacopo de' Pazzi and then hanged the other two conspirators Francesco Pazzi and the archbishop of Pisa, Francesco Salviati to one of the windows of the Palazzo della Signoria. Also after Sisto IV launched the excommunication and interdict against Lorenzo the city there was the war.

Florence allied with the Republic of Venice and the Duchy of Milan to counter the Pope and his ally Ferdinand of Naples, but the situation had become critical for Florence. So the Magnificent amazement of the highest authorities of the Peninsula, he went on 6 December 1479 in Naples to try to conclude a non-aggression pact with Ferdinand, who accepted realizing the power that he could take the state of the Church in the years ahead. Only now Sisto IV was forced to yield. This situation reinforce the prestige of Florence and its "guide". It began from that time in Italy a political alliance with Florence, from cities like Lucca, Siena, Perugia, Bologna, a policy of territorial acquisitions: Pietrosanta in 1484, Sarzana in 1487, and Pian Caldoli in 1488, re-establishing relationships also with Forli, Faenza and Naples.

In 1482 he allied himself with the Duchy of Milan to counter the city of Ferrara (Peace Bagnolo), then formed an alliance with the Pope against the Republic of Venice, playing the role of official orator of Florence to the diet of the papal league in Cremona in February 1483. But when Pope Innocent VIII declared war on Ferdinand of Naples, the Magnificent decided to ally with the latter. The peace in 1486 between Pope Innocent VIII and Ferdinand was great merit of Lorenzo il Magnifico (Lorenzo the Magnificent). In this historical period constituted the balance of Italy, conferred with his extraordinary political skills and a diplomatic policy of peace and balance throughout Italy.

Lorenzo as well as being a great mediator, he turned to make powerful members of his family: his son John became Cardinal and his daughter Maddalena married Franceschetto Cybo, son of Pope Innocent VIII. Lorenzo de 'Medici the Magnificent died in his villa at Careggi in 1492, leaving a great void in the role of kingmaker in the history of Italy, who had played exceptionally well.
Share 0 Tweet 0 +1
Previous Next

How tall was Lorenzo de Medici?

We are sorry but we don't know how tall was Lorenzo de Medici...