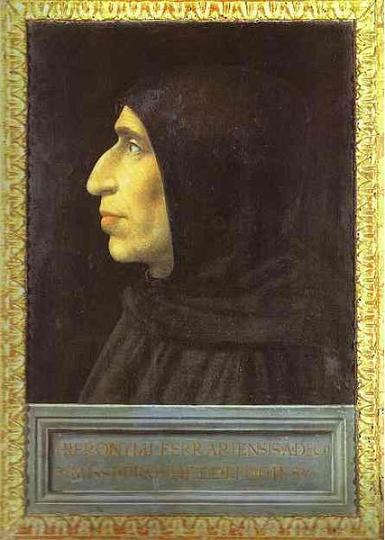 Girolamo Savonarola was born in Ferrara in 1452, he leaves the medicine studies for those religious ones, in the 1476 was made Dominican. In Ferrara he concluded the own theological studies begin in Bologna. In 1482, in the convent of Saint Mark in Florence, he was nominated reader of sacred writing. He was very famous like foreteller, not only in Tuscany: enormous suggestion in particular had his foretells on the "Apocalisse "and the" Genesis", in 1490-94, that they preannounced imminent calamities for Florence and Italy, with to a regeneration of the church through punishs and suffering.

He obtained the separation of the monastery from the Lombardic province of the order and seemed to come true the conditions for a concrete action of spiritual and political reform that, starting from Florence, interested all the Christian world. After the Carl VIII and Piero de' Medici hunting in 1494, Savonarola was the main man of one popular republic.

Although a lead political shrewed and online with the requirements and the florentine democratics traditions, Savonarola did not succeed to avoid the radicalization of his supporters (the "piagnoni").

The accusations of immorality from Pope Alexander VI provoked many enemies, between which oligarchical (the "arrabbiati") and the Filo-Medici (the "palleschi"). Very soon Savonarola was isolated. He was arrested, burned hanged in 1498 in Florence.
Share 0 Tweet 0 +1
Previous Next