Masaccio and his frescoes in Florence 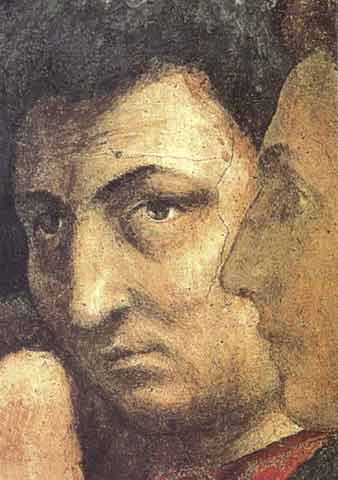 Masaccio went to Florence when he was very young and we do not know huch of his formation apart from the fact that he followed the teaching of Masolino da Panicale. Masaccio became immediately inserted in the new Florentine Renaissance and one of his first works was the Church of S.Anna Matterza (1424-25, Florence,Uffizi). We find a wise use of perspective and strong relief in the figures modelled by light as in reality.

In 1426 his first big work: the Church del Carmine di Pisa. He realized his work of art between 1425 and 1427: the frescoes of the Cappella Brancacci al Carmine di Florence where Masolino had worked previously. In the cappella we can admire il 'Grido della Cacciata dei Progenitori' and the 'Storie di S.Pietro' which placed the holy fact in the human reality of the Florentine people thus nearing his ideology with that of Brunelleschi and Donatello.

Another important fresco is that of the 'Trinity', (Florence, Chiesa di S.Maria Novella) in which we can recognise the hand of Brunelleschi regarding and the figures of Masaccio, the short artistic course of Masaccio was a clear point for the Florentine Renaissance painting because it was rich of anticipation. The Masaccesca style was in fact resumed later by no less than-Michelangelo.
Share 0 Tweet 0 +1
Previous Next