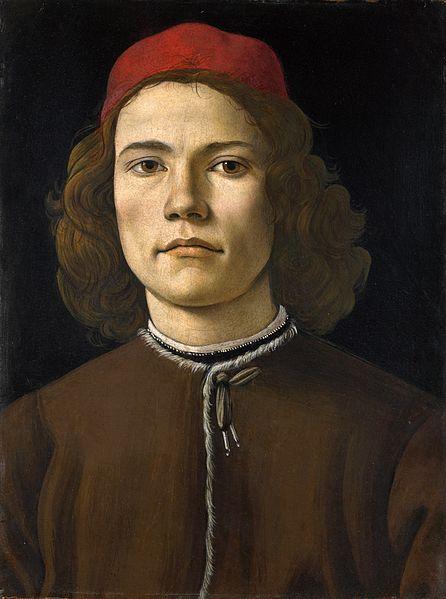 Sandro Botticelli was born in Florence. The most humanistic of the Renaissance painters, he was at first apprenticed to a goldsmith. He became, in 1465, a pupil of Fra Filippo Lippi's, and remained with him for about two years. It is believed that he later worked with Verroccio and with the Pollaiuolo brothers, from whom he learned precise drawing.

Some time around 1474, Botticelli became the favored painter of the Medici and their intellectual circle. Like them, the artist subscribed to Neoplatonism: an esoteric philosophical and literary theory blending paganism into Christianity and professing a spiritual union with God. It was for the Medici that Botticelli painted fresco panels (now lost), many portraits, and his two most famous works, "Spring" and "The Birth of Venus". His paintings are sensitively beautiful in soft tender colors, graceful, harmonious, and glowing in line. They are expressive of an intellectual and moral questioning, a humanistic spirit and a melancholy personal poetry.

In Botticelli's next period, which began in the mid-1480's, he painted his section of the frescoes of the Sistine Chapel. The composition here is more solid and monumental.

Lorenzo de'Medici died in 1492, and his successors were forced to leave Florence when the fanatical preacher Savonarola, who was eventually burned at the stake, attacked the "pagan" cult of the Medici. As a result, Botticelli, who became one of Savonarola's followers, is said to have destroyed several of his own works. He continued to paint austere works indicative of intensive emotions and concerned with religious rather than secular subjects, but with little change in his style. After Savonarola's death in 1498, Botticelli, poor and ill, painted very little. He died in 1510.

The two most important paints of Botticelli the "Primavera" and "La Nascita di Venere" are conserved to the Uffizi Gallery museum in Florence.
Share 0 Tweet 0 +1
Previous Next