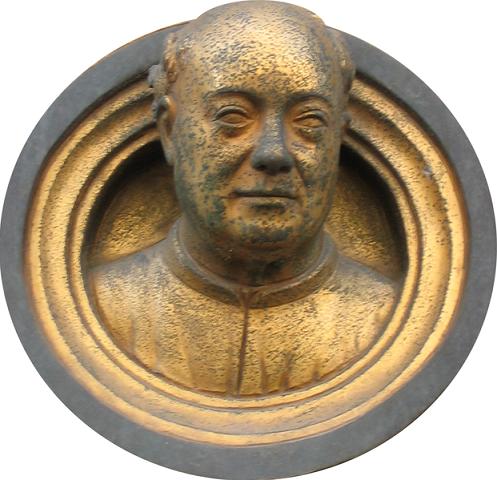 Lorenzo Ghiberti (Florence 1378-1455 was a sculptor, goldsmith, architect, painter and writer of art. He was an apprentice of the goldsmith Bartolo di Michele and began to work on his own in 1401 as a sculptor, making the second door of the Baptistery of Florence.

Despite his continual travelling ( Siena, Pisa, Roma, Venezia )Ghiberti concentrated his principal activity in Florence giving life to a flourishing artesian laboratory, and was helped by Donatello and Michelozzo. His principal works were those of an artist ( stained glass windows of the Cathedral ), of an architect ( sovrintendent during the construction of the Dome of S.Maria del Fiore, exonerated later in 1436 ) but most of all of a sculptor. His formation as a goldsmith was rich in technical and artistic knowledge and made so that his works in bronze were unique.

As a writer we can remember Ghiberti's principal work "Commentari" in which he faces the opinion of the evolution of the arts. The value of acient time and the recalling of the artists through the narration of their lives, for this Ghiberti can be proud for being at the beginning of the artistic literature of the Renaissance.
Share 0 Tweet 0 +1
Previous Next